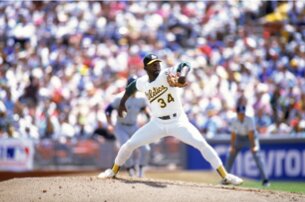 Dave Stewart, the founder and president of Stewart Management and Partners, is one of a kind as a player agent.

No other agent in the game can boast his experience as a player, a major league coach and a high-ranking front office executive. Add to that package his impeccable reputation throughout baseball, dating back to his playing days, as one of the game’s truly “good people,” and you see why he stands out among his peers.

During his 15-year Major League career, the right-handed pitcher’s list of achievements and honors is a long and impressive one.

Overall, he posted a 3.95 ERA and collected 168 wins, including four consecutive 20-game win seasons between 1987-1990, finishing in the top four in voting for the Cy Young Award all four of those years.

Originally drafted by the Los Angeles Dodgers in the 16th round of 1975, he saw time in the big leagues with the Dodgers, Texas Rangers and Philadelphia Phillies before signing with the As as a free agent in May 1986.

His 1989 season was historic in many aspects. Along with his 21-9 record and 3.32 ERA, he also not only earned a spot in the mid-season All-Star Game, but pitched the Athletics to the World Series championship over the San Francisco Giants during the historic Bay Area series which was interrupted by the Loma Prieta earthquake.

Stewart, who went 2-0 with a 1.69 ERA in two World Series games that October, was named World Series MVP as he earned the second of what would be three World Series rings (the first came in 1981 as a member of the Dodgers’ bullpen)

In 1990, Stewart reached a personal best with 22 wins against 11 losses and a 2.56 ERA, including 11 complete games. One of those league-best complete games came on June 29 in a 5-0 shutout of Toronto when he tossed a no-hitter. That achievement was especially noteworthy because Dodgers ace Fernando Valenzuela also no-hit St. Louis later that night, marking the only time in big league history that two pitchers threw no-hitters in separate leagues on the same day, and just the second time ever in MLB history that two no-nos were thrown on the same day (the first coming in 1898).

Taking the Athletics to the World Series once again, Stewart was named American League Championship Series MVP as he went 2-0 with a 1.13 ERA against Boston. He topped off that year by also receiving Major League Baseball’s Roberto Clemente Award for sportsmanship, community involvement and individual contributions to his team. In the history of the award, instituted in 1971, he remains the lone Oakland Athletic to earn the honor.

After signing with the Toronto Blue Jays as a free agent prior to the 1993 season, Stewart repeated his ALCS MVP honors as he went 2-0 with a 2.03 ERA in two games against the Chicago White Sox as the Jays went on to beat Philadelphia in the next round and Stewart got his third World Series ring.

Known for his post-season dominance, overall Stewart combined for a 2.77 ERA in 11 post-season series, going 8-0 with a 2.03 ERA in five ALCS series and posting a 3.32 ERA in five World Series.

After two seasons with the Jays, Stewart re-signed with Oakland in 1995 and spent the last few months of his playing career in the city where he saw his greatest success before officially retiring that summer.

But that playing career was not without its trials and tribulations. Before he hit his stride with his hometown Athletics, Stewart experienced the highs and lows that so many players go through – inconsistent statistics, control issues, spotty performance on the field. He was traded twice – from the Dodgers to the Texas Rangers, and then from Texas to Philadelphia.

Just a few weeks into the 1986 season with the Phillies, he was given his release. Two weeks later, he was picked up by Oakland and the rest, as they say, was history.

But Stewart believes that this wide breadth of player experience makes him an even better representative for his players than he might have been had his time in the game come without some of these obstacles.

“I’ve been through every aspect of the game, from (pitching in) the World Series to being traded to being released,” Stewart explains. “I don’t know of another agent in the business that has that much first-hand experience to offer.”

After his retirement, Stewart spent the next several years working in various off-field capacities within the game.

Hired by then-Oakland Athletics GM (and current New York Mets GM) Sandy Alderson after his retirement, Stewart served as special assistant to Alderson with the As before moving onto a similar position with the San Diego Padres under then-GM Kevin Towers in 1997. In 1998, he simultaneously acted as big league pitching coach, helping the Padres rotation lower its combined ERA to a 3.98 mark which was good enough to take them to the World Series, where they fell to the New York Yankees.

His next front office job was with another former team, the Toronto Blue Jays, where he served in various capacities including pitching coach, director of player personnel and rising as high as Assistant General Manager, a job in which he found himself across the table from many agents during contract negotiations.

After leaving the Jays in 2001, Stewart took the job of big league pitching coach with the Milwaukee Brewers for 2002 under manager Davey Lopes, who was fired early in the season. Stewart himself resigned mid-season to spend more time with his family.

His last position “on the field” came in the fall of 2003 when he served as pitching coach for Team USA during its Olympic trials.

Each one of these jobs added another set of learning experiences and viewpoints to his arsenal, making the transition to player agent not only natural but almost inevitable in retrospect.

From his experience on both sides of the negotiating table, as a player and as an assistant GM, he had a pretty good idea of what he wanted his MO to be in this venture. And he knew he was not going talk the talk without walking the walk.

“Unlike most of the larger companies, I personally represent all of my players – I don’t pass the buck to an assistant,” Stewart says. “This means I know first-hand what’s going on with each and every one of them. They become part of my family and as such I’m always available to provide on or off-field guidance and advice. This is why it’s important that I represent good guys that also happen to be good players.”

It didn’t take long for Stewart to get “on the map” as a force to be reckoned with. Within a year of getting certified, he had negotiated his first “big deal” for a local star, Oakland Athletics third baseman Eric Chavez, working out a six-year $66 million contract extension with the A’s a year before Chavez would have become a free agency.

In the decade since he put on his agent’s cap, Stewart has built a deliberately small but impressive clientele and done well by them, be they up-and-coming youngsters or blossoming superstars. In 2011, he negotiated an historic extension for longtime client, Los Angeles Dodgers outfielder Matt Kemp, as the 27-year-old center fielder signed an eight-year $160 million contract extension with the Dodgers, the largest contract in National League history at that time.